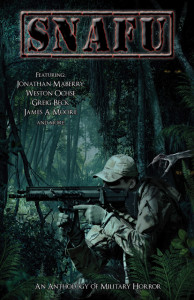 SNAFU: An Anthology of Military Horror

Edited by Geoff Brown and A J Spedding

The publisher approached me prior to the publication of this volume and asked if I’d consider writing the Foreword for it. I said, sure, send it over and I’ll have a look. After reading the book, I was more than happy to write the Foreword. Here, as a review, I’m reprinting that Foreword.

Nothing puts people closer to their base state than a threat to their life. Nothing reveals their animal nature more than the desire for survival at any cost. People trained for war have to deal with these extremes time after time, surviving for a greater purpose. Or at least, one hopes so. Because survival in a personal fight can be selfish, but survival in war might mean the fate of nations, or even species. And pretty much every permutation of that kind of fight for survival is explored in the stories you’re about to read.

Don’t be fooled into thinking an anthology of military horror is just a book full of Platoon or Aliens knock-offs. In these pages, the variety of story you’ll find is staggering.

There’s great variety in story style and length too. From very short stories to novella length yarns with lots of meat ready to be stripped off their bones. This book is a fine achievement and a great example of a theme superbly explored.

You’ll enjoy all the approaches here and the great writing from both established names and emerging talents. But no matter the variety, one thing that doesn’t change from tale to tale is the underlying truth evident in every one. Lives are at risk, great stakes are being played but throughout every page we’re never allowed to forget that regardless of the nature of the enemy, the real horror is war itself.

The new cover for the re-release of Carnies, by Martin Livings, has just been revealed, and it looks fantastic. Coming in 2014 from Cohesion Press.

The small town of Tillbrook has a secret. One that has been kept for over a hundred years.

Journalist David Hampden needs a good story to resurrect his flagging career. His damaged brother, Paul, just needs to find some meaning for his life.When David is alerted to a century-old carnival, the idea of a feature story is too good to pass up, so he drags Paul along to Tillbrook to act as his photographer. What they find is darker than they could ever imagine.Paul becomes part of the exotic world of the Dervish Carnival, est. 1899, and David must risk everything to save his brother. Even though Paul might not want to be saved.

Come on in, and enjoy the show. No photos allowed.

The wolf lives inside us all.

Valkeryn has fallen, the great king dead, and the Wolfen scattered. The monstrous Lygon and Panterran now rule. Arnold ‘Arn’ Singer, the youth from the past and perhaps the last human being alive on the planet, flees to the dark lands with the heir to the throne. He seeks answers to the missing Ancients – Arn’s ancestors – mankind itself. But back in his time the world continues to destabilize. The time distortion the mighty Tevatron collider created is growing larger and beginning to consume everything around it. The gateway vortex must be closed, Arn holds the key, and our world and its future is at stake.

Colonel Marion Briggs leads a team of Special Operations soldiers into the distant future world, fully armed and with one order – bring back Arn or his body. But there are more dangers in this strange and beautiful world than anyone knew. More horrors dwell in the deep jungles, below the inland seas and deep below the earth. There are things that can change the shape of two worlds, tear at sanity, and stretch friendships and loves to the limit.

Valkeryn II – The Dark Lands is the final chapter in an epic adventure that spans worlds and time itself. The book is available in print and digital formats from Cohesion Press and from Amazon.

“A great addition to your library.”
Voraciously Reads, USA.

Return of the Ancients: The Valkeryn Chronicles 1 is also available on Amazon.

About the Author: Greig Beck is an Australian author residing in Sydney with his wife, son and oversized black German Shepherd. “Beneath the Dark Ice” was Greig’s first novel. He now has many novels published in over 10 languages, and his Alex Hunter novels regularly appear in the best seller lists.

More information about Greig and his works can be found at www.greigbeck.com and he can be contacted at greig@greigbeck.com

The Gate Theory is the debut release from new Australian small publisher, Cohesion Press. Kaaron Warren is an established name in the field of Australian (and international) horror, so Cohesion did well to score this short reprint collection for their first title. The Gate Theory is a collection of five previously published short stories, without any particular theme other than Warren’s incredible and unique style. But, at heart, each story does address the pain of humanity and the blurred lines between good people and bad.

The title comes from A Concise Encylopaedia of Psychiatry where Warren, according to her website, came across the term “The Gate Theory of Pain” and knew she had found her title. It’s a fitting name.

The cover is classy and evocative, though as this is only an ebook release it suffers from not being legible in a thumbnail size, which might work against it for casual buyers. There is an introduction by A J Spedding, then the five stories are:

Purity, a story of a young girl pulled into a strange cult, run by an even stranger, very charismatic leader. Warren does a great job in this yarn of making laughter completely horrible and creepy.

That Girl is essentially a ghost story, but one with a very sad and poignant edge. It’s set in Fiji, where Warren lived for some years, and the tale captures the feel and superstition of that island nation very well.

Dead Sea Fruit is a story of anorexia and revenge, with a truly disturbing twist. It makes you wonder just who are the victims and who are the perpetrators.

The History Thief is by far my favourite story of the five. It’s a gentle and slow build, the tale of a quiet and isolated man and his adventures after death. The concept behind this story is truly inspired, again with a disturbing twist, and it’s expertly woven by Warren.

The Gaze Dogs of Nine Waterfall is possibly the most surreal of the collection, requiring the biggest suspension of disbelief, but again Warren takes the truly bizarre and makes it so very normal and human. Disturbingly so.

Each of these stories stretches the boundaries of both storytelling and character. Warren’s is a unique voice in horror. She has an ability to take us to places so utterly disturbing yet simultaneously so mundane and believable, that you start to look at people you meet with a sidelong glance. I call it The Warren Perception. It’s unavoidable. Read her work and you will start to look at people as she does. This is not necessarily a good thing, but it’s fascinating. I really hope this reprint collection helps to spread Warren’s fiction to a wider audience and I’m glad these stories are getting another outing. Highly recommended.

Horror in a Hundred – The Stripper from Hell by Sheldon Woodbury

The Stripper from Hell A poem by Sheldon Woodbury   She danced at night for shadowy men peeling off [...]

Horror in a Hundred – End by David Wing

End by David Wing Those gnarled, knotted fingers scraped at the window as the wind erupted. Lawn cha [...]

In this podcast Nathan Ballingrud talks about his forthcoming This Is Horror novella The Visible Fil [...]

Welcome to Must Read Horror. The internet has been scoured once again for the week’s best horror art [...]

A weird year ahead for Strantzas Simon Strantzas, author of the collection Burnt Black Suns and prev [...]