The launch is penciled in for 10am on Saturday the 4th of April, but keep an eye on the publisher’s or Swancon’s websites for confirmation closer to the event.

Swancon is Western Australia’s annual speculative fiction convention “that is invested in all kinds of media. You will find panels and discussion about games, film, literature, and graphic novels. If you are interested in science fiction or fantasy of almost any flavour, we will have something for you.”

A farmer is confronted by two desperadoes;
A tourist does her terrible best to evade a tracker and his dog;
A teenager discards his civilised mask inside a lonely roadhouse. 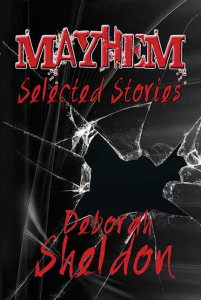 This collection of 28 short stories propels the reader through a kaleidoscope of Australian lowlife. In a range of styles, from dirty realism to noir, Deborah Sheldon pens the kind of fiction that is tough enough to shock, yet tender enough to hurt. An exploration of what it means to be human in the face of brutality, Mayhem: Selected Stories, is perfect reading for pulp novices and crime aficionados alike.

“[This is] short fiction told masterfully. Sheldon’s stories have that rare ability to speak volumes between each word. There are pieces of life’s puzzles the reader must complete, wonderfully unsettling strips of humanity that linger in the mind long after closing the book.” – Craig Bezant, Dark Prints Press

“Deborah Sheldon explores the rich vein of violence that runs through Australian society… The merely disconcerting and the deadly are juxtaposed and those who don’t know the difference, pay the price.” – Antonia Hildebrand, Polestar Writers’ Journal

“Sheldon specialises in the little moments that reveal the chaos and terror beneath.” – Elizabeth Rutherford-Johnson, The Short Review (UK)

A bit about the book, in Deborah’s words…

Mayhem: selected stories comprises 28 of my crime and dark-themed short stories. Most were originally published by magazines such as Island, Crime Factory, [untitled], Tincture Journal, and Shotgun Honey. Every story nagged at me to be written. A line of dialogue, an opening sentence, a plot point, a thematic arc – something in each piece compelled me to work on it. Personally, I love the short story form. I buy and devour plenty of short story collections every year; my bookshelves are laden with them.

My favourite character is always the protagonist of the story I’m currently writing. By that rationale, I have 28 favourite characters in ‘Mayhem: Selected Stories’. My job was to tell each of their stories as honestly as possible.

Robert Hood‘s complete collection of ghost stories will be released in April 2015 by IFWG Publishing Australia, in paperback and ebook formats. It will also be available in hardcover, and most notably, IFWG Publishing Australia will produce 200 limited edition copies, signed by Robert Hood. The cover and internal artwork is created by the very talented, industry-respected artist, Nick Stathopoulos.

Robert Hood is a highly respected, award-winning author, considered by many to be one of Australia’s grand masters of horror and weird fiction. Though over his 40-year career (to date) he has published speculative fiction of all kinds, he has notably produced 43 short stories that feature ghosts, hauntings and spectral horrors. These memorable tales display his ability to make the fantastic real, to embrace weirdness, and create human characters whose inner and outer lives, haunted by mortality, are laid bare and revealed to be our own worst nightmares. Ranging from melancholy reflections on life and death, through disquieting tales of dark humour and vengeance, to chilling visions of ghostly apocalypse, Hood’s stories are sure to draw you into a terrifying world that in the end is revealed to be irrefutably our own.

Peripheral Visions is a one-of-a-kind reference collection that includes all of Hood’s 43 ghost stories to date, three of them especially written for this volume.

“Rob Hood is Australia’s master of dark fantasy, seducing the reader with stories that are lavishly grim and rife with a quirky, unpredictable inventiveness.” (Sean Williams)

“Rob Hood is so good at what he does, he’ll have you believing in ghosts by the end of the first story in this brilliant collection.” (Kaaron Warren)

Peripheral Visions is a large volume of work, with a word count over 220k. In trade paperback format it will be published in two volumes, spaced over a month. Here is the appearance of the two covers, when laid side-by-side.

A single volume hardcover edition will also be published, with internal illustrations by Nick Stathopoulos. The exciting part of this publishing effort is a signed, limited hardcover edition, which can be pre-ordered now. There are only 200 limited edition copies available (numbered), each of which includes a Nick Stathopoulos-designed signature page, and a bonus ‘chap-ebook’ containing several zombie stories, titled Haunted Flesh: Stories of the Living Dead. These editions will disappear quickly, so we recommend interested readers pre-order now. IFWG Publishing Australia will not be repeating this offer.

With the release of WOLF CREEK 2 due next month in Australian cinemas, Notions Unlimited Bookshop is proud to present the following event, to celebrate the release of Penguin’s WOLF CREEK prequel novel series:

Wine & Nibbles – plus some bloody surprises! – provided on the night.

This will be a FREE event, but space is strictly limited, so do please contact us to book your place.

Some bloody end of the world goodness from Permuted Press…

“Dead! Dead! Dead!” is the story of an ageing biker who finds himself on the run with an ER doctor after a shipment of contaminated cocaine turns the city’s junkies into contagious cannibals.

This is Mannering’s fourth novel with Permuted Press, and will be published in 2015.

*SHTF = Shit Hits The Fan – an outbreak scenario, be it alien invasion, deadly flu, civil war – anything that triggers a change in civilisation.

Fat Zombie is an anthology of unexpected survivor stories from the apocalypse.

The collection will include stories that tell the tale of the losers, the geeks, the freaks and the sad-sacks. It could also include stories of the differently abled, or anyone lacking skills, physical ability, education, resources so common in many zombie survival stories.

These are the survivor stories of the people you never expected to survive the end of the world.

Is this Australia’s most iconic horror villain?

Yes, without a doubt.

And while we wait for Wolf Creek 2 to be released in February to give us even more reasons to be terrified of the Australian outback, we can load up on all things Mick through the commercial release of two prequel novels that are now available from Penguin or at any good bookstores (paperback and digital formats). How good is this for Australian horror? Damn good!

The first is Origin: Wolf Creek Book 1 by Greg McLean and Aaron Sterns. 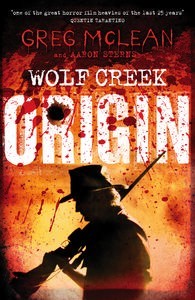 Nature vs nurture turns out to be a bloodbath

The wide open outback offers plenty of space for someone to hide. Or to hide a body.

When wiry youngster Mick Taylor starts as a jackaroo at a remote Western Australian sheep station, he tries to keep his head down among the rough company of the farmhands. But he can’t keep the devils inside him hidden for long.

It turns out he’s not the only one with the killer impulse – and the other psychopaths don’t appreciate competition. Is Cutter, the station’s surly shooter, on to him? And what are the cops really up to as they follow the trail of the dead?

In the first of a blood-soaked series of Wolf Creek prequel novels, the cult film’s writer/director Greg McLean and horror writer Aaron Sterns take us back to the beginning, when Mick was a scrawny boy, the only witness to the grisly death of his little sister. Origin provides an unforgettably bloody answer to the question of nature vs nurture. What made Mick Taylor Australian horror’s most terrifying psycho killer?

“One of the best serial killer novels out there . . . destined to be considered a classic in future years” – ScaryMinds.com

Mick’s learning, and his schoolroom is a war.

When sharpshooter and killer Mick Taylor searches for a place to keep a low profile, he finds somewhere where his peculiar talents are appreciated: a war. And in Vietnam, an out-of-control sergeant takes the amateur murderer and turns him into a pro.

Back home, Mick makes use of the sick lessons the army taught him, when hapless tour operators bring a Kombi-load of sightseers out his way into the Western Australian desert. Two suspicious flat tyres deliver an engaged Japanese couple, a father and son, a US army vet and his girlfriend, and a couple of cute girls to Mick’s lair. Middle of nowhere, population one. The group finds themselves in hell, as Mick makes sure their once-in-a-lifetime tour stays that way. And though one of the drivers escapes and goes for help, Mick sees no reason to stop the killing spree.

In the second Wolf Creek prequel novel, the cult film’s writer/director Greg McLean and horror writer Brett McBean get to the heart of Australian horror’s most terrifying psycho killer. Is Mick Taylor possessed by some dark power in the landscape itself? Something ancient? Does the Red Centre demand blood?

And if that’s not enough to terrify you, you can read what Director Greg McLean has to say about it all here.

Head on a stick, anyone? 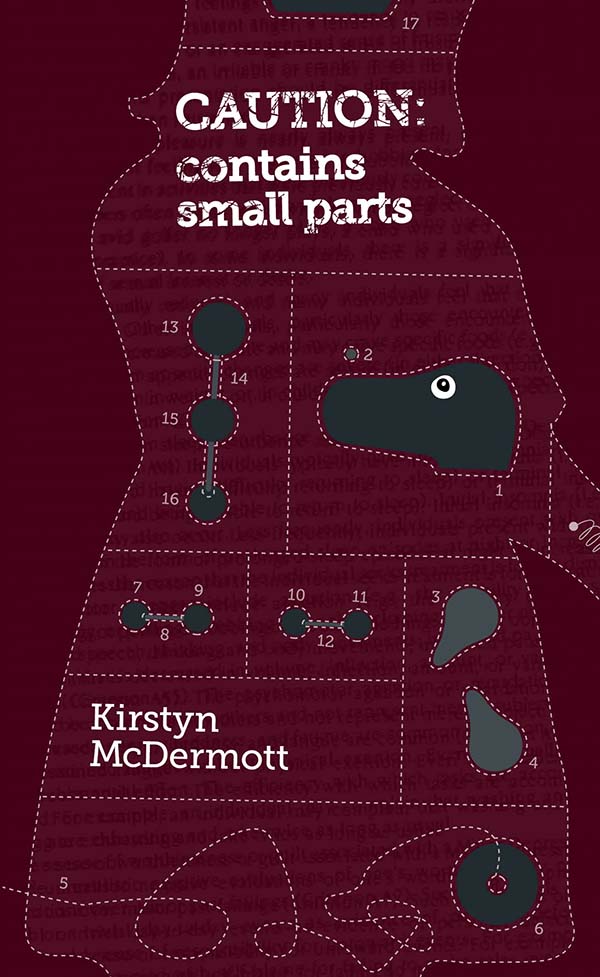 Tim Major is the author of Carus & Mitch (Omnium Gatherum). His short stories have been publishe [...]