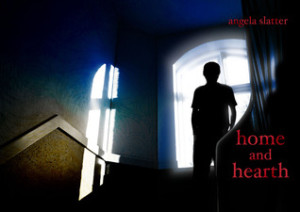 This review will be short, because ‘Home and Hearth’ is short. That’s not to say the length in any way diminishes its strength or impact. Instead, the growing sense of dread seems concentrated, distilled to achieve maximum effect.

‘Home and Hearth’, by Angela Slatter, is the 11th title in Spectral Press’s Chapbook series. It concerns a family. A mother and her child and the absent father who has abandonded them. Caroline is a newly-single mum. Her teenage son, Simon, has returned home after being found innocent of a horrible crime, and like all parents Caroline feels a strong need to protect him. It is a base instinct; the knowledge that we’d do anything for our children, no matter what. That our love for them is unconditional. But what happens when that instinct is questioned? When the evidence mounts that our child may no longer be who we think they are?

‘Home and Hearth’ is a story that preys on readers through their empathy. Simon is as distant as any teenager can be, but Caroline’s love and fear are both realistically (and somewhat heartbreakingly) rendered right up until the confrontational end. And, if you’re a parent, that ending will probably hit you hardest of all.

Well paced and beautifully written, Angela Slatter has created a small and unsettling masterpiece with ‘Home and Hearth’. Highly recommended.

2 thoughts on “‘Home and Hearth’ by Angela Slatter – Review”