I’ve never come across the short fiction of Nathan Ballingrud before, but when this book was released I saw a sudden buzz around my social media feeds. I always pay attention to that sort of activity, so I picked up a copy of the ebook. Having just finished reading it, I went straight back to the Small Beer Press and ordered the Trade cloth edition. This is a book that needs to stand proud on a bookshelf.

There are nine stories in this debut collection from Ballingrud and each one of them is amazing. There is not a low point anywhere in this book. Balligrud’s writing is both beautiful and unrelenting, artistic and brutal. The same can be said for every story and every character. He draws on pain for his work, whether that pain is a lost young white supremacist, a broken down waitress, a man who recently got out of jail and doesn’t know his daughter any more, a man who lost his child, a husband who has become increasingly disconnected from his wife who suffers terrible depression and regularly attempts suicide. Against those characters of raw realism and terrible everyday struggle, Ballingrud draws the most incredible supernatural and horrific environments in which to put those people. The crass, the ugly, the brutal, the terrifying. It exists in every inch of every story and the characters reflect their terrible situations as much as those situations reflect the characters.

And yet, while I might make it sound horrendously bleak by the above description (and believe me, it often is!) it’s also sublimely beautiful, in both idea and execution. This book contains one of the most amazing vampire yarns I’ve ever read. Also one of the best werewolf stories and, at a stretch, the best zombie story ever. It’s not a zombie story in the Romero tradition, but even so. It’s better than that. More subtle, more heartbreaking. I’ve also read several stories based around the horror of New Orleans and Katrina, but Ballingrud’s The Way Station blows them all away. And there’s a touch of Cthulhu mythos in this book, equally well handled.

There are no answers here, no happy endings. Some stories are left hanging, almost too soon, but only better for that. There’s no suggestion of a way out of the darkness drawn by these tales, whether that’s the darkness of Elder gods, blood sucking vampires or humanity’s incredible ability to care so little for its fellows. Yet for a book with such a diverse eye for monsters and the supernatural, the overall sensation left after reading is one of humanity. Which should ever be the root cause of horror writing, that exploration of the truly dark nature of the human, in the face of monsters or of themselves.

Ballingrud’s touch is light, his implications subtle. For that reason, the moments of stark and visceral horror have all the more impact. This is without a doubt one of the best short fiction collections I’ve ever read. Not for the faint of heart, but worth the trauma for the incredible writing, absolutely real characters and palpable sense of wonder that comes from every touch of the unnatural along the way. This book is a dark road, emotionally battering and utterly incredible. I can’t recommend it highly enough.

Following on from the critical success of “ill at ease” comes volume 2, featuring seven original horror short stories, all of them guaranteed to give you the chills. The anthology is published by PenMan Press and available from  Amazon in both print and digital editions. 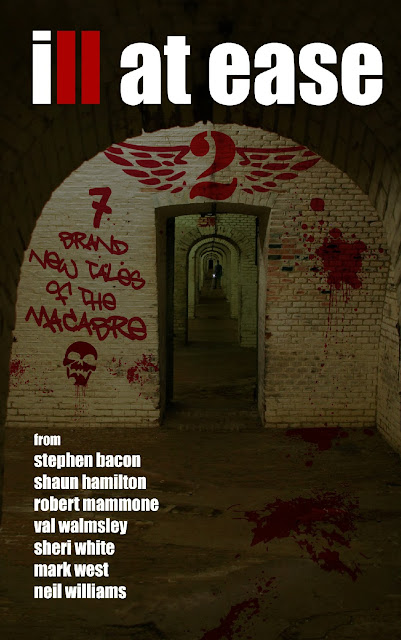 You will descend into an underground train station to uncover a dreadful secret and watch in horror as a paradise holiday turns sour. You will see a bullied boy who’s helped by local history and share the anguish of a father, losing his child in a shopping centre. You will take a trip with a cancer sufferer and share the pain of a couple, desperate for a child. You will discover that history needs to be kept somewhere.

Seven stories, seven writers and you.

Prepare to feel “ill at ease” all over again.

Stories should be between 2,000 and 12,000 words and contain speculative elements – science fiction, fantasy and horror and their sub-genres are all welcome, but we recommend researching FableCroft’s past projects for an idea of the sort of stories we publish. Generally, no erotica or splatterpunk is desirable. Please query the editor before sending stories outside those limits.

We are seeking original stories only, for first and exclusive world rights (for a period of twelve months, excluding any subsequent Year’s Best reprint request) – no reprint submissions please.

Electronic submissions only. Please send story as an rtf or doc attachment to fablecroft [at] gmail [dot] com, with the subject line: SUBMISSION: Title of Story

Please be cautious to only submit final, proofread copy – ensure you have checked all your edits and removed all track changes in your document.

The editor will respond with a submission received email within 48 hours, but story selection may not occur until up to one month after the deadline. This anthology is open worldwide.

Payment will be AUD$75.00 and one contributor copy of the print book. Further royalties will apply for e-book revenue – information about royalties will be provided in contract negotiations with successful authors and is dependent on final book details.

Thanks to Jonathan Strahan for the title idea, from his Aurealis Awards acceptance speech in May this year.

FableCroft Publishing is pleased to announce that Focus 2012: highlights of Australian short fiction is now available from all ebook retailers.

This ebook-only special anthology is the first of a series of yearly collections which will collect the previous year’s acclaimed Australian works. Containing only the most recognised speculative work of the year, Focus 2012 packs a big punch, for just $4.99USD.

The Australian Horror Writers’ Association (AHWA) runs a competition every year for both short stories (1,000 to 8,000 words) and flash fiction (up to 1,000 words). This is a blind-judged contest with three judges. This year the competition was judged by Joanne Anderton, Guy Salvidge and Ashlee Scheuerman.

All the winners and HMs are:

The three winning stories will be published in a future issue of Midnight Echo magazine.

The results for this year’s Australian Horror Writers Association Short Story and Flash Fiction Competition have been announced. They are:

Congratulations to the winners, and well done to all who entered. The competition was blind judgedby AHWA Members Alan Baxter, Felicity Dowker and Jason Fischer, and managed by Martin Livings.

Both winners will see publication in Midnight Echo magazine soon and will also receive a winner’s trophy.