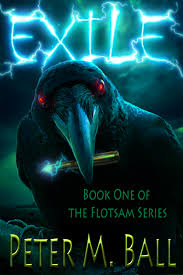 Exile is the first novella in what is (I believe) a trilogy, The Flotsam Series. Broadly defined, it’s urban fantasy. But I like to think of it as a whole new subgenre: Gold Coast Demon Noir.

The story follows the return of Keith to the Gold Coast (in Queensland, Australia) from sixteen years of self-imposed exile. It was self-impose exile or die in circumstances that are slowly revealed through the plot. But returning is utter lunacy and Keith knows it. The trouble is, he and his partner, Roark, really messed things up with a cult in Adelaide and returning to the Gold Coast is about the least deadly option left open.

Ball has done a great job of creating a grimy Gold Coast noir setting here and it was great to read something so thoroughly Australian, yet retaining all the great tropes of noir as we know it. Then add in the supernatural elements and it’s a heady brew of worldbuilding. Ball’s description of the Gloom and the creatures from it who inhabit people and live just beneath the fabric of society is expertly handled. The development of the plot and characters shows a writer at the top of his game. He’s also used the novella length really well for structure.

However, it’s not all rainbows – after all, what is? As far as the writing is concerned, the only real complaint I have is that it’s a novella. I know that seems strange after my comment above, but Ball writes really tightly and with great economy of language, which suits the novella well, but this story is left hanging wide open and there are all sorts of things follow up on. It’s not like the next one will be a sequel – rather a continuation. So I wonder why all three weren’t put together as a novel rather than three novellas. But let’s be honest, that’s a pretty weak complaint.

My other concern is with the publisher. The edition I read via the Kindle Store was absolutely riddled with typos, missing words and so on. This is no fault of the author, as the publisher’s job is to find and fix that stuff. So that was rather disappointing. But it’s no reason to avoid this story.

Dark, gritty, funny in places, horrible in others, this is Gold Coast Demon Noir done perfectly. Highly recommended. I’m looking forward to the next one.