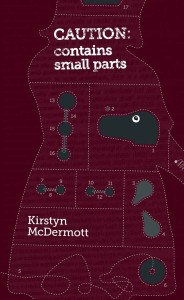 This book is a collection of four short stories by award-winning author, Kirstyn McDermott. There are themes here of gender and sexuality, damage and rehabilitation, but those themes never overpower the stories. It’s an excellent collection and well worth its recent Aurealis Award nomination.

McDermott is a powerful writer, evoking a great sense of place with all her work and her characters are well-drawn and fully realised. I found the writing in this collection to be a little less poetic than some of her other work, like the novel, Madigan Mine, for example, but no less impactful for that difference. And she retains her masterful use of language, the occasional phrasing that’s just so electrically right.

The four stories here are all bordering on horror and reality, skating that thin line between the real and the fantastic.

What Amanda Wants follows the trials of a counselor who has fluffed her way through actual qualifications because she has a supernatural ability to see to the very heart of people’s issues and actually, physically relieve them of those burdens. Until she is presented with Amanda, a troubled young woman whose walls are so solid, the powerful counselor can’t see anything through them.

In Horn, we have an unusual narrative broken into parts – regular storytelling, interviews, excerpts from academic papers – all slowly building the picture of a writer who hit the big time with a big fat fantasy series about warring unicorns and the problems that’s brought him. Very interesting asides into fantasy gender tropes in this story, but the format didn’t quite work for me as well as I might have hoped.

The title story, Caution: Contains Small Parts, is a poignant and disturbing horror story about a man haunted by a toy dog. He tries to get rid of it and can’t, it keeps coming back and will clearly continue to do so until he stops and works out what it wants. This is a very sad story, and powerfully written.

The final story is a long one, novelette length, I think, called The Home For Broken Dolls. This is a truly disturbing story about those realistic sex dolls that many people collect and truly obsess over. It’s told form the point of view of Jane, a woman horribly disfigured and traumatised in a moment of domestic violence, who has found peace in refurbishing damaged dolls. This story received a nomination for Best Horror Short Story in the Aurealis Awards as well as the collection as a whole getting a nod in the Best Collection category. You can see why. This is by far my favourite story in the book. McDermott does a great job in normalising the fetishes of these people, as of course, their fetish is entirely normal to them. It’s also very much on the border between literary/fantastic fiction and horror. It’s not a horror story like you’d expect, the darkness subtle and almost hidden behind the fantastic and the allegorical. But it is a truly excellent tale. And quite disturbing.

This is a great collection and a testament to McDermott’s skill. Highly recommended.